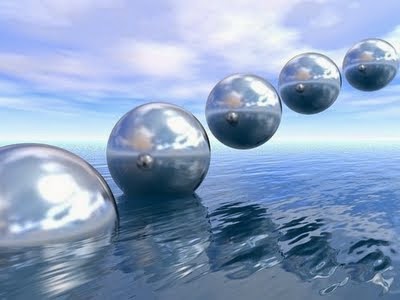 There are many yous that exist in parallel realities.  I am talking about identical-to-you-other-selves, not other incarnations in which you are a different person altogether.  For each decision that you don't make, the other yous make those decisions to live out the other possibilities for each situation.  Your soul gathers all of these experiences.  The other yous exist in parallel universes, which occupy the same space we are living in and yet we cannot see them - most of the time.  On rare occasions, we can see these parallel realities.  I have had this experience once.

I was planning on meeting my friend for lunch.  She told me that her husband was going to drive her and her son to the restaurant to meet my son and me, but that he would not be joining us.  He was going to wait for us and hang around the shops while we had lunch.  When I was driving down the street the restaurant was on looking for parking, I saw my friend and her husband parking their car.  They were pulling into a spot on the street.  I passed them and continued to look for parking.  I ended up parking at the top of a parking garage a couple of blocks away.  I texted my friend when I got out of the car and told her that I had seen her parking and that I was on my way and would be there in 5 minutes.  While I was walking down the block toward the restaurant, I saw her husband sitting in the car where he had parked it just a few minutes ago and he was on his cell phone.  My friend was no longer in the car.

We had a nice lunch and at the end we were about to walk to our cars.  My friend asked me where I had parked and I told her that I had parked in the parking garage.  She told me that she had also parked there.  She mentioned that she had been confused when I texted her that I would be there in 5 minutes because if I had seen her park her car, then I would have surely arrived at the restaurant at the same time.

And now we enter the twilight zone....

I told her that I had seen her husband parking the car on the street and that she was in the car with him.  She told me that he had been planning to come, but at the last minute, had decided to stay home, so she drove herself.  We walked to the parking garage and it turned out that we both parked on the top floor right by each other.  And by the way, as we walked down the street, the car which her husband had been sitting in was gone.

So, apparently what I saw was a parallel universe/parallel reality.  I am sure of this.  I saw the reality in which her husband did come and the one in which he did not come!  It really BLEW MY MIND!!!  I was baffled by this experience and asked a couple of my intuitive friends about it.  The answer they got was that yes, I had seen a parallel reality.

I understand that I am at the forefront of the new, expanded consciousness on the planet and that by having these experiences first, before most people and sharing them, when more people start to have these experiences, there will be people like me to help explain what is going on.

Welcome to the twilight zone everyone, or shall I call it the new Earth?  Whatever it is called, I think it's really cool!
Posted by Stephanie at 5:50 PM