Kundalini Yoga and Me: Part 2 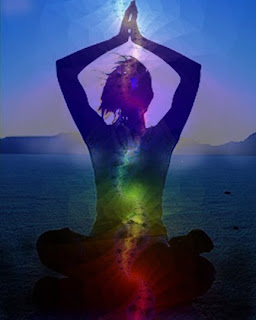 It's not just that your muscles get tired and sore from doing it.  It stirs up emotions and uncovers what is held deep within your unconscious and subconscious mind in order for those buried emotions to be dealt with and released.

That explains why several people in my KY Teacher Training were crying during our weekend-long class and others said they cried after class.  I did not cry.  Instead, I felt euphoric, elated, high-vibing, and had waves of love pouring through me after each class.  I really felt incredible.

Then, I was irritable, down and lonely.  This lasted for two weeks.  A friend pointed out to me that ever since I started my Kundalini Yoga Teacher Training, I had not been myself emotionally.  I had also realized this correlation, so I went online and did a quick search to see if there was a relationship between negative emotional release and Kundalini Yoga.  This is how I found out that yes, indeed, there is.  It stirs up your "stuff".

What is interesting is that in our last class, our instructor showed us a video of Yogi Bhajan, who brought KY to the US from India.  In the video he talks about how as children we are taught to use the potty - "to contain our shit".  We are taught from a very young age that "we must put our shit into a container and contain it".  He says this yoga helps us to release it.

Luckily, I have had years of experience working on my stuff.  I don't find that I have any major issues left to deal with (that I am aware of at least) - just life as it comes up in the present moment, which we all have to deal with until we leave this place.  So, I feel pretty clear in my mental and emotional bodies.  However, I still had this underlying irritability and discontent that came up after doing that weekend-long training, so it did bring up whatever residual stuff was in there.  It mostly had to do with my present-life situation - I felt like I wanted to look at every aspect of my current life and fix all of it right away.  Not a bad thing at all.

Another friend pointed out that I was being triggered in my core issue.  With that realization and knowing, I felt an empowerment surge through me in that instant and I knew that I could and would overcome it.  In that instant it was healed and it was effortless.  This feels like a miracle.  I attribute this rapid transformation to the practicing of Kundalini Yoga.

That night, exactly two weeks after that first weekend training and those two weeks of feeling down, I had a pooping dream. (sorry to be so graphic!)  I filled the whole toilet in that dream.  The next morning, I woke up as a new person!  I was myself again and I felt great!  I didn't even have to "work through" my stuff.  Just one dream and I was done with it.  Amazing!  What I am finding so fascinating about this yoga is that it does seem to bring up what lies deep in the subconscious for clearing, but at least in my case, it seems that the clearing is automatic.  It just clears away without thought or processing.  I am astounded by the rapidity with which the shifts take place.

I feel lucky that I am doing this training after having worked through most of my stuff way before I started it so that I can enjoy the higher-vibrational benefits of it immediately.  It's not that I am perfect.  It's that having been on the spiritual and healing path for many years, I know the difference between who I was when I started on that path and who I am now.  I see the people around me going into emotional breakdowns and I understand what they are going through.  It is not a bad thing that Kundalini Yoga stirs up and clears out your crap - it's a good thing and a great way to do it.  It's also good for people to know that this can happen.  I read that people tend to run away from doing this yoga once this emotional clearing starts to happen, so I think it's good for people to know about this ahead of time.  I actually got a little worried myself and wondered if doing it was a bad thing, since I felt so bad after the weekend training.  However, learning about the tendency for emotional releasing from this practice has brought me relief.  Since then I have done more KY workshops and classes and I have benefited from the high vibrations that move through me as a result.  There is a softness within me and a deeper peace.

So, yes, this yoga kicks your butt in many ways, but in good ways.  And the journey continues....

Posted by Stephanie at 4:37 PM